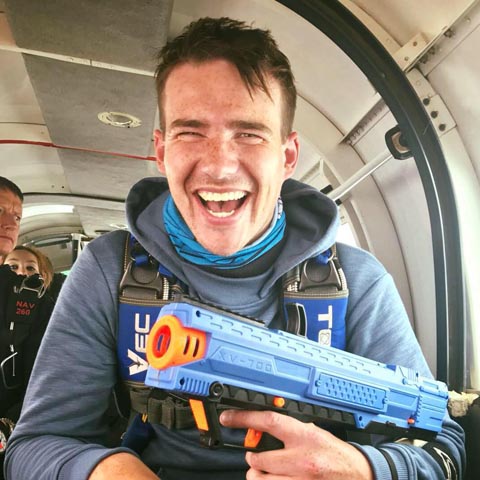 We all want to be the best we can be right? That is one of the things I love about skydiving, that we are limited only by our own imagination, enthusiasm and tenacity. One of the most fulfilling things I have done in my skydiving career is competing in a range of disciplines; Free-flying, Formation Skydiving and Canopy Piloting, all of which have their own structure and challenges. What surprised me most each time was the overall feeling of community and sportsmanship. I hope this article will dispel some misconceptions around the world of competitive skydiving in the UK.

What do you love in skydiving?

A very big question that I didn’t realize I needed to ask myself for a long time is “What do you love in skydiving?”. This question had of course been asked many times over boogie fire pits or bad weather days, sitting on the drop-zone and I always had very specific answers like, “I love free-flying” and then going on to talk about whatever trick or exit I was working on at the time. It wasn’t until much later in my skydiving career I realized this question demanded a far deeper and more complex answer. As skydivers I feel that we all have a similar outlook on our progression through life. Most would try new things outside the realm of conventional recreation, search for new experiences and when we find something we love, we push to advance ourselves and learn as much as we can about it. So why is this question so important to me and what does it have to do with competing in skydiving? Some of the main aspects of skydiving I love (apart from free-flying obvs) are that I get to push myself to be better. I love seeing the results of my hard work, spending time with my sky mates, helping them with any issues they may have and generally having a good laugh! I would go as far as to say these are the values held by most skydivers in the UK Certainly the ones I come across anyway! Having these values from day one was fantastic. They helped me avoid staying static with anything I was working towards and kept me from getting too down on myself, or annoyed when things weren’t going as well as I’d hoped. When I just couldn’t nail that sit-fly to head-down transition, no matter how many times I tried or how sick I was at it in the tunnel, promise!

The more time I spent in the sky and the more advanced my skydiving got, the more I looked for new challenges. Every year the UK National Championships would happen and I would be in awe, I would see the videos shared on social media of these skydivers doing incredible things and zooming around the sky together. I didn’t think I had the skill or imagination to do what they did yet, so I would watch these videos, think “wow that’s cool, maybe one day” and then scroll down and watch some other video, probably of a cat playing piano or something else awesome. I started attending skills camps and boogies all over the place and continued to push my skills and knowledge and learn from some of the best skydivers in the world, with the thought of competing pushed to the back of my head. I now look back and see how attending these skills camps (while bringing my flying skill and knowledge on tremendously) affected my early attitude towards competing. The appeal of attending a skills camp is you get to jump with the best of the best in whatever field the camp is centered around. A sizable percentage of the load organizers and coaches that you are jumping with have a large amount of experience in competing. This gave me a hugely biased view that to compete, you need to be a member of the sky elite; thousands of jumps and sponsored up to your eyeballs. Up to this point, the only contact I had had with a competitor was being organized by them on a paid event. If I was being told what to do and how I could improve on a simple tracking or free-fly dive, how could I possibly hope to compete against them? I didn’t want to turn up to a comp having trained and completely bomb and be the worst there by far. This is the fear that I think stops most people from signing up. So once again, competitions got pushed back and I would continue to think “maybe one day” for a little while longer.

This attitude couldn’t last forever, I knew that one day I would love to compete but I wasn’t sure when I would be ready because in my head I would be going head to head with those people I had been watching in those nationals videos and being coached by on skills camps. The problem with watching the elite skydivers do their thing is that we don’t see the journey to the tippy top, the hundreds or even thousands of training jumps where things didn’t go quite to plan, the time sacrificed and money spent on getting to where they are now. I cant tell you the amount of times I have been talking to a more experienced skydiver about something I have been trying to get better at and having them say “this stuff doesn’t happen overnight you know mate”. People have a tendency to forget that every skydiver, no matter who they are, has been told this and had to keep pushing to obtain their skillset.

I knew I was getting closer and closer to being ready to compete but I just needed a little nudge. Thankfully the skydiving scene is in no shortage of colorful characters who are more that willing to provide a nudge or even a hard shove in the right direction. This nudge came in the form of my team-mate Alan Foulkes-Williams, who in my opinion has one of the most refreshing and positive attitudes towards skydiving I have ever encountered. I was sat at home chilling and Alan rang me He was sat in his van and told me his next challenge he set himself would be competing in free-fly at the next UK Nationals, almost no fear or trepidation in his voice. He said he was wondering who could be his teammate and my name popped into his head. “Yeah I like him and he’s not terrible at flying” I believe he said was his thought process, and that was the start of the team.

I had no idea what to expect heading to our first nationals. We had done around 100 training jumps over a couple of training camps and felt reasonably comfortable and confident in our routine. The nerves were pretty high when we first arrived and chatted to the other competitors. This lasted right up until the moment we left the door on round 1. After that I felt like it was just another training jump we had done and just like that I was over the nerves. What I wasn’t expecting was the level of friendliness and willing to discuss rounds with all the other teams. After each landing we would all pack in the same area and chat about what went well and what didn’t. To hear the top teams in the country talk about how they messed something up was something I had never experienced before and certainly made me feel way more at ease. I could feel all the tension and fear I had built up in my head over the years fade away in an afternoon. I remember thinking I wish I had taken the plunge and joined in a lot sooner than I did. The atmosphere was amazing and was full of people pushing themselves to get better, seeing the results of their hard work, spending time with their mates and helping others get better. The exact values I held in such high regard that helped me get to the level I was at.

Competitive skydiving has evolved so much in the UK over the last 5 years with the introduction of more categories for most disciplines, it’s now the easiest it’s ever been to start getting involved in the action! The idea that stops people competing is that they’re not good enough, in most cases this simply isn’t the case. I implore people to have a look at the pre-requisites for all of the categories at a national competition, absolutely nowhere does it say anywhere that you need to be a rock-star with a billion jumps and an athletes page on Facebook. After I completed my first competition in 2016, I was so impressed with the attitude of everyone there and could not believe how much I’d learned from the experience, I had spent my entire skydive career prior to competing, thinking that competition skydiving was the pinnacle of the sport, that it was the goal and finish line I was running towards. In reality it was another aspect of the sport that offered up those same feelings of any good days jumping. Another fantastic stepping-stone in my skydiving journey.

The question of “What do you love in skydiving” for me has been answered by those values I’ve spoken about. They can be found in a lot of places in skydiving but I don’t think I have found a more rewarding application of them than I have in competing. The world of competition skydiving has been a huge eye opener for me and has helped me become the skydiver I am today. I would strongly recommend anybody who wants to improve and is willing to challenge themselves, to learn from my mistakes and wasted time. Have a look at all the different categories available today, see where you can get involved and sign up. Who knows where it will lead and what new road you will find yourself walking down. See you at the next nationals!

Do you have a question about this article?

If you would like to ask Rich a question or if you are interested in getting in touch for Freefly, Tracking or Belly coaching then please use the contact details below.